The immersion process started this week at Fapcom with the 3rd Communication Symposium.  I had never heard of the place before this – a recently built Catholic college offering new media studies. They have recently partnered with PUC Collective Intelligence Lab, led by Professor Rogério da Costa.

I was pleasantly surprised by the modern, very organized and well-equipped premises, the number of young people attending (full auditorium) and what is more, helping out at the conference, the informal yet serious/respectful atmosphere and the constant presence of the deans and professors. It was refreshing to move away from my habitual Anglo-Saxon edtech oriented world/connections behind the computer screen to a f2f multicultural and transdisciplinary dip into the same new media themes with a different twist and a somewhat Italian flavour.

From Massimo di Felice I heard that in order to describe our relationship with the new territory (cyberspace) mediated by digital constructs , we need a new anthropology and a new ecology. While we explore new ways of inhabiting this world we feel again the tension of the apparent paradox between being and becoming, order and chaos, static and dynamic, staying and going, Hestia & Hermes.

According to Derrick de Kerchove from the Toronto School of Communication, media structure our minds, culture and the way we communicate with the others. In the Western world, the printing press promoted a culture of literacy, whose effect on our logic and reason resulted in a “visual-linear-specialist” way of perceiving what surrounds it. By exploring and reacting to this “outer space” mediated through the digital interface (which acts as our our skin), we simultaneously explore our inner space (our heart and assumptions).  Digital technology opens up new possibilities, as we internalize “outer space” into “inner constructs” and vice-versa.  (note:  Michael Wesch’s Anthropological Introduction to YouTube illustrates the phenomenon). 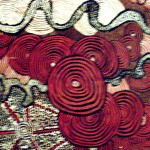 For the Eastern world (Taoism, Buddhism) and many oral cultures, for instance, phenomena are not perceived in a static or fragmented way, as they are in typographic culture.  Rather, they contain several possibilities as to meaning and form and the cosmological model of change relies on the how all phenomena inter-relate and inter-depend. For the highly mobile Australian Aboriginal populations, for instance, the land and nature sit at the core of traditional culture and spiritual life – Indigenous Aborigines had an intimate knowledge of the land, its creatures and plants an understood and cared for their different environments and adapted to them. Their song stories show the memory does not reside in their heads but is taken directly from signs on the territory. The Inca rulers controlled a vast network of roads and communicated through the Quipu, which recorded their knowledge.

Messages today are no longer tied to time and place and people do not necessarily share the same contexts or are in direct interaction. The challenge today is how institutions and citizens will communicate in the near future, how and if you can contextualize knowledge and how mobility and connectivity will redefine user experience.

Rejane Cantoni presentation of the work she does together with Leonardo Crescenti took me to the FILE ( Electronic Language International Festival) exhibition and revealed the combination of different technologies and techniques being used to try to capture/reproduce the senses and interact with human beings. I was particularly attracted to the web work of the late Austrian artist Zelko Wiener in partnership with Ursula Hentschlager: Panorama, Phantasma. The binary art site is fantastic.

Finally, Marcelo Godoy and Federico Casalegno showed us examples of the relationship between information, the environment and society and how pluridisciplinary and multicultural approaches are being used to design connections using mobile technologies : eLense (Catalunya), Ride Link, Living with NFC (Italy), Bus Stop and Pitti.Mobi

This entry was posted in Events and Conferences, Technology and tagged Communication, file, haptic, newmedia, Technology. Bookmark the permalink.