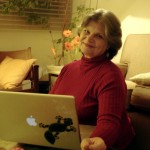 I’m Barbara Dieu , EFL teacher and educator,  involved in international collaborative/ exchange projects online since 1997. I am presently retired but  have a few classes at the Lycée Pasteur, the Franco-Brazilian school in São Paulo. I had a busy decade between until 2010, keynoting and giving workshops on new media literacies and I have used social tools and international networking to advance language learning, multi-literacies and professional development.

I am particularly interested in how participatory media can be implemented in the different learning contexts, what issues block innovation/communication/learning and what is needed for educators to open up to global participation, innovation, creativity and change in local contexts. You can contact me at beeonline (at) gmail (dot) com.

My nickname online is Bee (not from Béatrice as one would expect – just a coincidence – I used to sign my letters B. and a friend sent me the Bee

avatar , which I used for years). I became Bee Kerouac while I used  Second Life . Although this seems to date me chronologically, I am not really contemporary of the Beat generation, though I confess I suffered some of their influence years later.  The SL avatar name choice is more intentional – I chose Kerouac because while blogging and networking in cyberspace, I somehow identified with the book On the Road and the way it was written.

My old blog, which I have now merged with this one, was called “Wide Open Spaces…Freedom to Roam” because cyberspace has offered me the possibility to travel and meet different people and perspectives. Besides, as I have always felt claustrophobic and constrained by bureaucratic systems, groups or structures that fence me in,  I have always needed a clear horizon and wide open spaces before me.  I have now my own domain address – and because of this, for the sake of consistency, I have re-named it Beespace but kept my freedom to roam…