Last night, Bel Colluci, from TV Cultura asked me (through a quick message on Gtalk) to participate in an “experiential participatory transmission” they are conducting: streaming the Roda Viva interview program raw and live footage on the Web a week before its polished taped version is shown on TV. The idea is also to get online participants to interact with the program through the Radar Cultura page and Twitter while the interviews are being carried on.

The whole setup in the studio consists of a mobile unit : a laptop connected to the Internet, a mini DV video camera, a tripod, a photo camera. Live transmission is done through streaming using Mogulus (video), Cover it Live (multimídia chat), Flickr (photo storage), YouTube (video storage) and Twitter (live coverage). The crewman follows what happens to the guests and journalists from the moment they arrive until they leave.

Bel confided she was happy to have been given this opening and space for action. I accepted as I was eager to check not only the environment but also the efforts that are being made in this very traditional broadcasting mode to incorporate new technologies and make it interactive – the same challenge we are facing in education. Not all schools accept experimentation and going beyond the fixed walls of their “studios”.

The interviewee for this event was Jana Bennett, CEO of one of the largest media conglomerates in the world – the BBC. I read about her a bit before going to bed and, as I decided to tweet in English for an international audience, I sent word through the various lists and communities I belong to around the world.

A chauffeur came to fetch me, Lucia Freitas and Bel early this morning and off we went across town to Fundação Padre Anchieta, where TV Cultura is housed. On arrival, we met Aloisio Milani, our fellow twitterer ; the other journalists who were going to interview Jana: Lilian Witte Fibe, Carmen Amorim, Patricia Kogut, Eugenio Bucci, Lucia Araujo, Nelson Hoineff and Paulo Caruso, a live cartoonist. After a scrumptious breakfast in the best Brazilian style (orange juice, coffee, pao de queijo, sandwiches, fruit and cake), we were led to the make-up room (no shiny noses or disheveled look permitted) and then to the studio . 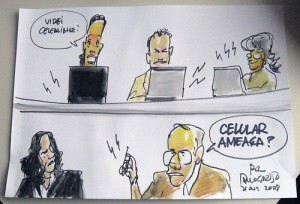 Lucia, Aloisio and I sat on the perch at the top, overlooking the scene.

It was fun but more like quick note-taking for me, as I had little audience – Vance connected but I missed him on the scrolling page and Dennis (from the Webheads) made a number of comments. I must confess I found it difficult to multi-task on so many levels: pay attention to new faces and context, what people were doing in the studio,  what journalists were asking/what Jana was answering, reporting/commenting and paying attention to what was streaming from outside and responding . I guess that like all in life,  it’s a matter of getting used to it and practicing. I would have definitely adopted another strategy had I had an audience watching the stream and asking questions or making comments, which is what happened in Portuguese. My own tweets (in English) can be found on a filtered Tweetscan (reverse chronological order), everyone else’s both on Twitter search (keyword rodaviva) and Twemes.

Good marketing for TV Cultura and Roda Viva program – an attempt to make a TV program interactive and showing all backstage live one week before the recorded program goes on air. Twittering also provides a written record of what went on from different perspectives – which finally converged in spite of the different languages. Some blogging will divulge the event and maybe bring on more people to watch it next Monday.

I found that many of the questions (fortunately with some good exceptions) were navel gazing, asking for advice or models for a cultural and societal context which is entirely different from the UK. Most did not really probe or unveil anything that you cannot already find on Google about Jana or the BBC annual reports.

Jana Bennett was very much herself and emphasized the importance the BBC gives to quality programs, international partnerships, catering for the different needs/ages/tastes and how new technology is being used to interact with the audience and integrate user-generated content whenever possible. Also important – the absence of political/commercial pressure when producing and broadcasting. According to Jana, quality depends on money (95% from license fees paid by viewers who trust and endorse quality), time alloted to production, independence and autonomy for program producers who (unlike in Brazil) are free from political, commercial (and economic) pressure. A Trust Committee, with different members chosen according to their expertise (not affiliation), regulates what goes on by reflecting and discussing the choice of controversial programs AFTER they are broadcast. Differently from the American or Brazilian TV, whose use by a younger generation is declining (for lack of quality content), Jana mentions that in the UK teens enjoy TV to cool off, relax and choose their programs according to their mood and time of the day as they are made relevant to them. She gave an example of an educational “reality show” which brought together teens interested in fashion – they were taken to different production areas both in England and India, exposed to quality work and sweatshops and asked to reflect upon this experience. The American PBS series follows a similar concept (Merchants of Cool).

It was interesting to participate in this – wondering now how we can mobilize our schools to follow a similar path, discarding the mouldy, senseless layers of bureaucracy which seem to have gripped the system and frozen it. How can we converge by giving value both to what is past and present quality and inviting young people to pave the future by contributing, innovating and creating new channels for expression and interaction . Although education and culture evolve in a slower tempo than art, fashion and commerce, once the infrastructure and governance are laid out, we should feel the change- slow but powerful. As an ancient proverb says “the journey of 1,000 miles starts with a single step”. Have you taken yours?