As I browsed through and responded to the different introductions posted on the LAK11 Moodle forum, I noticed with satisfaction that many participants came from countries other than the US, UK and Canada, with a larger contingent than usual from non-English speaking countries in Europe, South America and Asia.

As Stephen Downes mentioned in the first Elluminate recording,  a connectivist course is based on 4 pillars : autonomy, diversity, openness and interactivity. I’m going to focus on cultural diversity in this post, which I deem critical in education.

Each country has its own educational system, cultural and social norms + expectations which should be taken into account,  especially when it comes to finding out what questions are to be asked when building/using tools which gather data, to choosing the right variables, to analyzing and to interpreting data about learners,  based on which suggestions are made and many times decisions taken.

I believe there is no perfect algorithm, no best way or one best method but many.  The assignment given for week 1 of playing around with  Hunch has shown it eloquently. Participants expressed many times,  among the privacy and ethical issues,  the annoyance at the inaccuracy and the US-centred nature of the suggestions,  the lack of cultural recognition and the targeted US advertising. 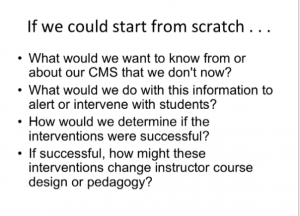 and bearing in mind that  the interest here does not lie in the content but the process,  I decided to play and practice by collecting data from the course itself.  It’s totally exploratory and I do not yet know where this is going to lead me, what I will encounter on the way or how I will use it, if I ever do. Let’s leave it to serendipity. However, let me take you through my initial steps and thinking process 🙂

First, I tried to count (manually) the number of participants from the introduction forum,  which would be a gauge to who had made that first step instead of just enrolling. So, (if I have managed to count correctly) out of 228 enrolled members (to this date and time) , 201 have already introduced themselves. Moodle must certainly have an easier way to collect this data but I cannot access it. Google Learning and Analytics group shows 587 members – so I suppose many are following from a distance.

As to participants by country, I encountered the same difficulty but managed to produce a  graph made online with the  online  graph maker young kids use at school. (Yes,  I am at that level of expertise as math and stats are not my thing,  but I am hopefully slowly improving my skills).  The graph is primitive but allows me to go over some basic notions and gives you the opportunity to visualize better how participants are distributed by regions.

As a learning by-product, and extra time-consuming task, I found out that continents are defined by convention and than their number depends on the country where you are studying, which again shows that visions of the world depend on where you stand and which way you look.  For Latin Americans, the world is composed of 6 continents while for China and most English-speaking countries the number seems to be 7.

<parenthesis> Somehow related thought that flew by:  looking in retrospect, I do not think my Geography teacher mentioned anything about the relativity of continent classification but I do remember my Mum’s comment on how surprised she was to discover that in Brazilian History books (she fled Poland when she was a kid) Napoleon was depicted as an enemy and not the hero who marched  together with the Poles against the Russia as she had been taught there…</parenthesis>

This obviously did not make my life easier when trying to classify the countries and insert them into continents so I decided to use the UN Geoscheme as reference, which starts with 5 main regions.  Here are some of the approximate results of this hunting-gathering data phase, which does nevertheless give you a rough idea of the world inside Moodle. Please correct me if you find gross disparities or if a country has been left out. 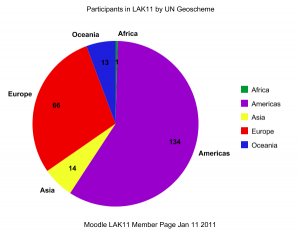 Americas are well-represented but out of the 134, 116 are from the North.  Asia comprises many different countries (Cambodia, China,Kuala Lumpur) including the Middle East (UAE, Quatar, Israel, Turkey) and sports usually 1 per country except for Iran, Israel, China and India (about 2 and 3 per country). In Oceania, 11 are from Australia and 2 from New Zealand. 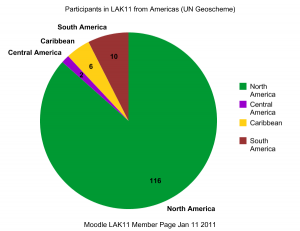 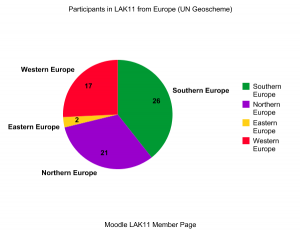